I was looking at the sand dune in front of me. “I thought we were supposed to go to a lake!” It was 42 degrees celsius and I was sweaty, sunburned and slightly pissed at the sand dune. I started climbing. 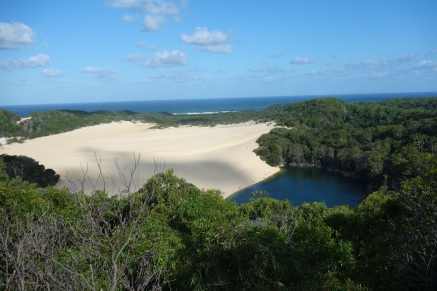 I had arrived at Fraser Island, also called “Paradise” in the local native language. After a brief introduction of “do not feed and pet the dingoes” we went to the first lake, one of three awesome lakes on this island that only consists of sand. It was the start of an awesome four day adventure:

I was in Paradise

So when I heard of the Koala Sanctuary in Brisbane, my last stop in Australia, I absolutely had to visit. Not only do they have koalas, they also have kangaroos, dingos, bats, and, what made me very excited: platypus.

After the obligatory sightseeing in Brisbane, I took the bus to the Sanctuary and had the most amazing time feeding the kangaroos (eww, I got kangaroo spit on my hands and one sneezed on my tshirt), watching the many koalas up close (and smelling them up close) and learning more about snakes and birds and everything else that lives on the Australian continent. 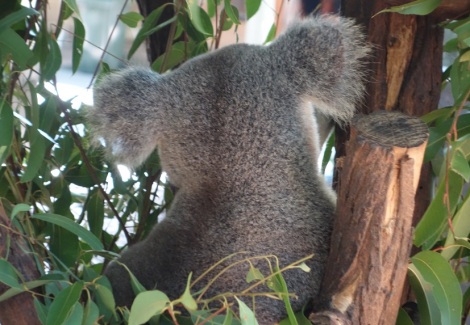 I love these cute ears

Sleeping all the time…

We’re so cute, but so smelly!

There were other animals in the sanctuary as well. Just not as photogenic as the koalas were. 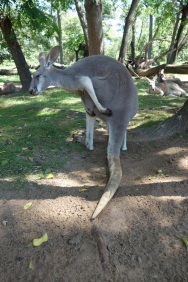 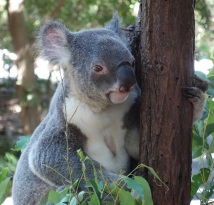 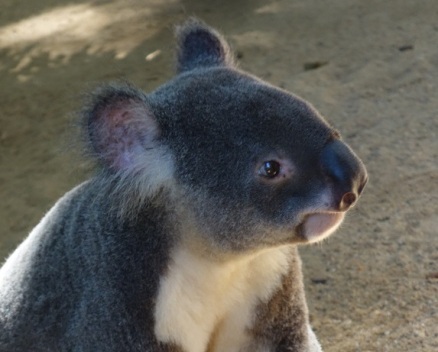 So many weird animals! I love weird animals! Speaking of weird, the platypus was much too fast to take a picture of. I had somehow always imagined them being lazy animals, just floating around, but let me tell you I tried for a good 25 minutes to take at least one decent picture of them but couldn’t get one due to their speed. Never underestimate this animal and be happy that it’s a peaceful one. If platypus were in some way dangerous, the world would be screwed because you would never be able to see them coming!

Brisbane was actually the last city of my tour through Australia, but I decided to post this one before the last post as it made more sense to me. Also it makes my blog less sad to look at, because it shows that I got to see the koalas after all. The post before was more of an advanced sob-story of me wandering through the bushes and not finding any so I thought I had to clear that up before going on with the final post which will be about Paradise. Yeah, I stayed in Paradise for four days. And I had loads of fun there, swimming in orange and crystal blue lakes, getting bitten by tiny fish – but more about that in the next post.

“Where the heck are all the animals???”

I had just embarked on my first bush walk, 8k long, which should bring me from my hostel to the Koala sanctuary and then to the beach on the other side of the island to a serene bay. END_OF_DOCUMENT_TOKEN_TO_BE_REPLACED

Falling off your bike is part of life.

Suffering is part of life. Failing is part of life. Life will never go on smoothly. Life always is a struggle. Everybody struggles with something in their lives. You struggle and I do too. At the end of life, there always lies death. Nobody is invincible, no matter how many material possessions you have, no matter how nice your life is, life is finite. END_OF_DOCUMENT_TOKEN_TO_BE_REPLACED

Due to some unfortunate events, this blog will be on hiatus for a while.

Aloha! The past two weeks have been quality time offline, mainly due to the fact that the hostel(s) that advertised free Wifi had free Wifi for about 5 minutes and then it was 20AUD per day to keep it running. Makes me feel glad that I don’t have an online business, I would’ve been screwed if that was the case. So what has happened between now and my last blog post? END_OF_DOCUMENT_TOKEN_TO_BE_REPLACED

I stepped outside the airport to get to the city center and fog crept up my glasses, covering them completely. I took them off to see huge dark clouds on the sky and large mountains on the horizon. I had landed in Cairns a couple of minutes ago and after I got my suitcase I headed outside where I was greeted by tropical climate, air so thick and humid you could almost cut it. After some confusion I finally found a bus to take to the city center, the driver thankfully brought me to my hostel’s doorstep.

I brought my stuff in my room and after a quick dinner headed out to have a look at what Cairns has to offer. Not thinking about much I looked up to the sky to look at the moon and I saw some birds flying by. “Hmm, so many birds so close to sunset, that’s a bit weird…” I thought “…and they have strange feathers…?”

Looking closer they were bats. Huge, gigantic enormous bats. Bigger than your face and faster than you can run. Welcome to Australia, the country of weird shit, where culture shocks happen within the hour! END_OF_DOCUMENT_TOKEN_TO_BE_REPLACED